With the recent snowstorm, the Village has received many inquiries as to the schedule for snow plowing.

Our snow plowing efforts are prioritized based on the amount of traffic streets carry.

Priority 1:  Major roads such as county and state highways and high commercial areas that carry the most traffic.  These are further prioritized by emergency routes which are Allouez, Manitowoc, Greenbrier, Steffens, Hoffman, Development, and Central.  Secondary routes include Hazen, Townhall, Guns, Verlin, Industrial, Sal, Commercial, Fire Lane, Landmark, Klondike, Bower Creek, Willow, Glenmore, Juneberry, Carnation, Continental, Eaton, Madrid, Essen, and Emerald.  Priority one routes are maintained, cleared, and salted to a higher standard than other streets in the Village. 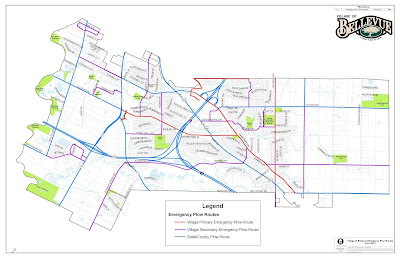